An Open Radio Access Network (O-RAN) is a totally disaggregated approach to deploying mobile fronthaul and midhaul networks built entirely on cloud native principles. O-RAN is an evolution of the Next Generation RAN (NG-RAN) architecture, first introduced by the GSMA’s 3GPP in their release 15 (5G version 1) technical specification TS 38.401. The O-RAN Alliance formed to undertake the advancement of NG-RAN philosophies, expanding on the scope of what was originally outlined by the 3GPP. Comprising over 1601 member companies, the O-RAN alliance issues specifications and releases open source software under the auspices of the Linux Foundation. 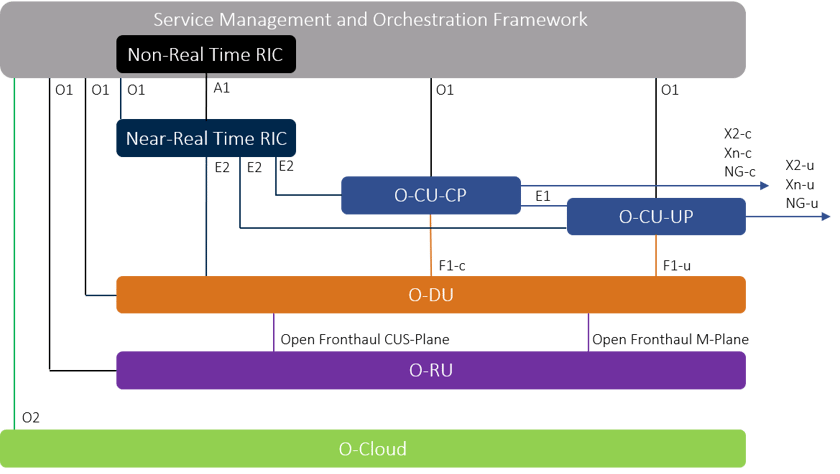 This affords numerous technical and operational advantages, regardless of whether the RRU, DU and CU remain co-located within a 5GNodeB (gNB), like existing NodeB RRU/BBU implementations, or the CU is physically deployed to a more centralized location. The centralization of the CU in an aggregation site reduces costs and accelerates the implementation of dynamic and highly automated multiaccess edge compute (MEC) clouds for the RAN (aka C-RAN). This functional decoupling will also enable the adoption of modern transport protocols which can also align with the 5G core user plane (i.e. SRv6) while easing the addition of new latency, high-bandwidth, AI/ML-driven applications.

The deployment of NG-RAN components is defined as being with or between the fronthaul, midhaul and backbone network. Open interfaces are described as either lower-layer splits (LLS), in the case of the RU to DU connection, or higher-layer splits (HLS) as with the link between the DU and CU. This nomenclature is descriptive of the OSI layer (i.e. L1/L2/L3) exposed by the interface and handled by the NG-RAN function. Where components are instantiated will depend on the requirements of the service slice. A low latency service might demand a CU be co-located with the DU in the access layer while a slice supporting a simple machine to machine communications application would scale more cost effectively with a CU within the network core.

NG-RAN clearly defines the DU and CU plus the F1, E1, Xn and NG between them and the core network but stops short of outlining the service management framework and interfaces required for the RAN to operate within an orchestrated and automated cloud environment. TS 38.401 also fails to address the RU-DU interface.  Without further definition, it would be logical to adopt the exiting Common Public Radio Interface (CPRI) defined between the RRU-BBU. Although theoretically a standard, this interface has been heavily modified by individual vendors, effectively locking their RRU to their BBU.

While CPRI is a high-speed serial interface, the bandwidth demands of 5G will stretch the limits of local fiber and increase the need for more radio units. Current implementations do not allow for the DU to reduce this burden by offloading some of its functionality to the RU. While the enhanced CPRI (eCPRI) interface was originally proposed as an alternative, this specification was also developed by just four2 large vendors. The O-RAN Alliance has therefore taking on the task of defining new Open Fronthaul user and management plane interfaces between the DU and RU.

To ensure openness, O-RAN decouples hardware and software into 3 layers: The commercial off the shelf (COTS) merchant silicon (including x86), a hardware abstraction layer and an application layer, where the RAN functions reside. Ensuring each layer is vendor agnostic, the O-RAN alliance has specified a list of requirements for a cloud platform which supports the execution of O-RAN network functions. This is referred to as the O-RAN Cloud Platform, or O-Cloud. Deploying O-RAN functions on x86 hardware in cloud native environments using lightweight (OS virtualization) containers demands a strong emphasis on data plane acceleration. This must be achieved at the application level, as these functions will not have access to the Kernel. As such, solutions may be specific to each O-RAN CNF but leverage standard techniques such as DPDK and FD.io or employ more advanced techniques, such as the Metaswitch Composable Network Applications Platform Packet Processing Engine (CNAP/CPPE).