What is 5G beamforming, beam steering and beam switching with massive MIMO

Beamforming is the application of multiple radiating elements transmitting the same signal at an identical wavelength and phase, which combine to create a single antenna with a longer, more targeted stream which is formed by reinforcing the waves in a specific direction. The general concept was first employed in 1906 for trans-oceanic radio communications.

While digital beamforming at the baseband processor is most commonly used today, analog beamforming in the RF domain can provide antenna gains that mitigate the lossy nature of 5G millimeter waves.

Beam steering is achieved by changing the phase of the input signal on all radiating elements. Phase shifting allows the signal to be targeted at a specific receiver. An antenna can employ radiating elements with a common frequency to steer a single beam in a specific direction. Different frequency beams can also be steered in different directions to serve different users. The direction a signal is sent in is calculated dynamically by the base station as the endpoint moves, effectively tracking the user. If a beam cannot track a user, the endpoint may switch to a different beam. 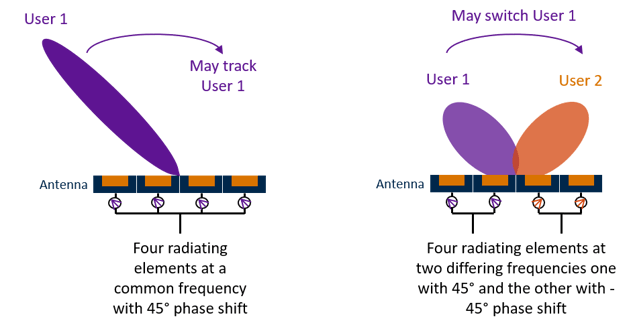 This granular degree of tracking is made possible by the fact that 5G base stations must be significantly closer to users than previous generations of mobile infrastructures.

Multiple input and multiple output (MIMO) antennas have long been a feature of commercial public wireless and Wi-Fi systems, but 5G demands the application of massive MIMO. To increase the resiliency (signal-to-noise ratio / SNR) of a transmitted signal and the channel capacity, without increasing spectrum usage, a common frequency can be steered simultaneously in multiple directions.

The successful operation of MIMO systems requires the implementation of powerful digital signal processors and an environment with lots of signal interference, or "spatial diversity"; that is a rich diversity of signal paths between the transmitter and the receiver. 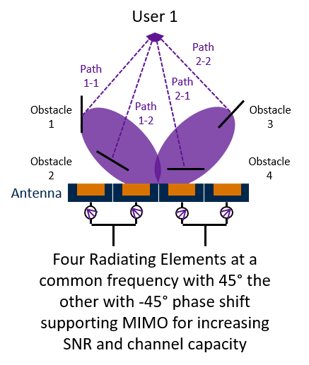 The diversity of arrival times, as the signal is bounced from different obstacles, forms multiple time-division duplexing (TDD) channels that can deliver path redundancy for duplicate signals or increase the channel capacity by transmitting different parts of the modulated data. First conceived of in the 1980s, there are a few differences between classic multi-user MU-MIMO and Massive MIMO, but fundamentally it is still the large number of antennas employed and the large number of users supported. The degree of MIMO is indicated by the number of transmitters and the number of receivers, i.e. 4x4.