What is the IP Multimedia Subsystem (IMS)?

The IP Multimedia Subsystem (IMS) is a reference architecture defined by the 3rd Generation Partnership Project (3GPP) for delivering communication services built on the Internet Protocol (IP). Along with providing a framework for evolving from classic circuit switch (CS) to packet switch (PS) telephony, IMS is lauded for its openness and well defined hierarchical structure.

First conceived of in the year 2000 as an “All-IP network option”, initial IMS standards were ratified by 3GPP members in March 2002 under the technical specifications TS 2x.228 and have been continually evolving since. The IP Multimedia Subsystem standards detail the core network functionality required to provide multimedia communication services, identifying the distinct elements responsible for delivering each feature and documenting a well-defined set of reference interfaces to each component.

This horizontally-integrated methodology is in direct contrast to the vertically-integrated approach (aka stovepipe) where a single vendor — or even single product, in the case of a Class 4/5 switch — was responsible for delivering an entire telephony service infrastructure. IMS enables operators to prevent vendor lock-in and select ‘best-of-breed’ components for each operational feature, while still guaranteeing their interoperability and interworking. 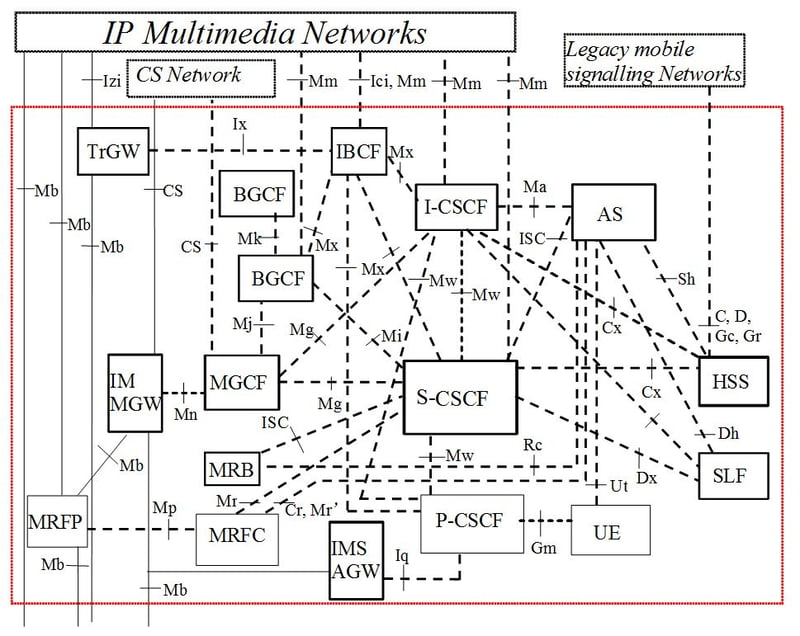 IMS was accepted into ETSI as part of the Telecommunications and Internet converged Services and Protocols for Advanced Networking (TISPAN) curriculum plus other regional groups like ATIS in North America, giving IMS prominence in the fixed line space and well as the mobile arena. While IMS held promise, early deployments were hampered and adoption was hindered as standards became increasingly complicated by the need to support backwards infrastructure compatibility, complete legacy feature parity, evolving access technologies and emerging mobility demands. Initial IMS implementations were in direct contrast to its founding philosophy, with single large equipment vendors providing totally integrated functions at price points that replicated that of previous architectural approaches.