What is the Composable Network Application Processor (CNAP)?

CNAP is a flexible and ultra high performance software packet processing engine developed by Metaswitch to provide the foundation for virtualized network functions that handle data plane traffic such as the 5G User Plane Function (UPF).

At the heart of CNAP is a highly-tuned match-action classifier engine.   This can be configured to implement any arbitrary packet processing pipeline by means of a YAML document that describes the sequence of match-actions to be applied to each incoming packet.  For example, the upstream pipeline for the 5G UPF might include the following elements: identify session from GTP Tunnel Endpoint Identifier, strip GTP tunnel header, perform source address anti-spoofing check, identify this flow by finding a match with one of a set of Packet Detection Rules, apply bandwidth limit policing to this flow as per configured policy, perform usage reporting, apply Network Address Translation and route towards data network. 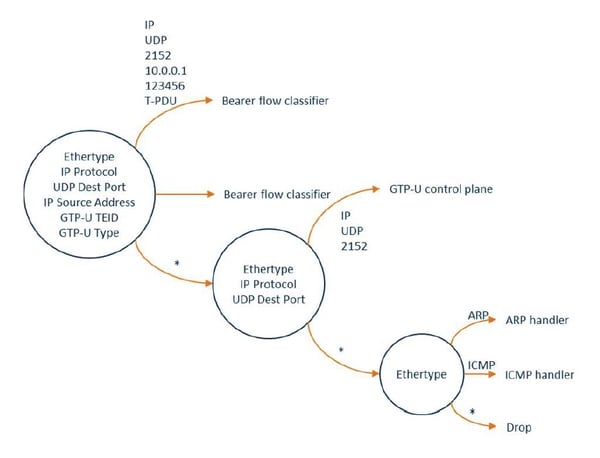 Like most high-performance packet processing engines, CNAP leverages the open source Data Plane Development Kit (DPDK) to maximize the efficiency of packet transfer between the network and the VNF workload.  But CNAP out-performs well-known DPDK-based packet processing engines such as Vector Packet Processor by a factor of about five, when applied to complex packet pipelines such as the 5G UPF.  This remarkable leap forward in performance has been achieved through the application of several breakthrough developments in packet processing: